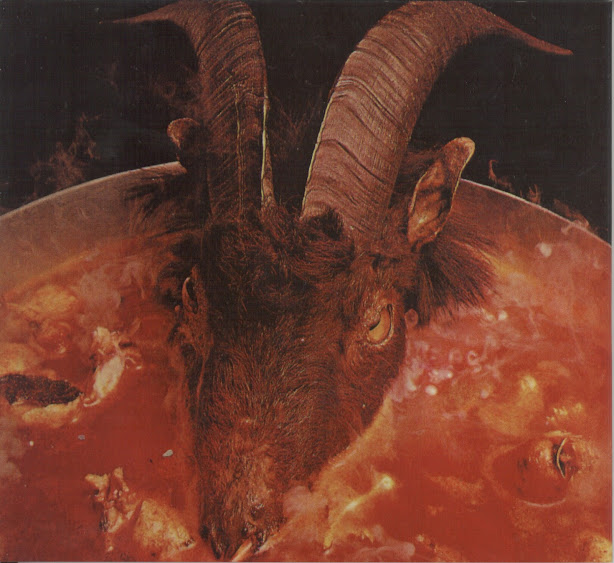 the album that makes me weep the most of all is Goat's Head Soup.

They are winter songs they fsr recorded partially in Jamaica.

They couldn't have made a less 'traditional' ballad'sy album and it feels like maybe they all just felt misplaced in Kingston. The reggae influence didn't come till much later it seems in Black and Blue.

Yet the guitar effects are so heavy and moody... mein got 😮

tucked inside my gown

Sing we for love and idleness

naught else is worth the having

and though i have lived in many a land

naught else is worth the giving

than do high deeds in Hungary to pass all men's believing

-------------
He walks through the supermarket with his grill and beggar’s impunity. The security guards in the shop follow him like hawks. As he leaves he sings:

The album came out together with a documentary, in which she alleges to have been abused by her ex in gruesomely violent ways. It’s one of those tings. Ppl need to go to the police tho ultimately publicity stunts are so much more effective. They actually punish the assailants and don’t grill the shit out of the victims. It’s even cathartic. I’ve been there too…

She’s the Dutchess of Neder-hop, yet the language is full of slang consisting of mostly English, Papiemento and French. It’s what the yung ‘uns do tho. This Patois sits on her Almere accent. Her style of rapping celebrates her own composure, body-positivity, and her independence in spite of the trollers and haters. She seems more trolled than any male artist that’s for sure,

emblematic of the modernization of Dutch to the detriment of purists, many poets, writers, etc. She gets so much hate for rapping, for her glitz.

Its nice to see a lot of her latest singles didn’t make it “Loca” too Kanye derivative, theres definitely her searching for sounds through all the best young producers Holland has to offer.

I once saw her training at the Gaasperplas in the heat of the summer in the Bims… Total star, she had a Bijlmer entourage of personal trainers and God knows what…

Towards a new, fashionable form...

FASHION
Hi Death
DEATH
Hey there, is that you? My oh my, you look great!
FASHION
Thx dear, you, erm...
DEATH
(...)
FASHION
(sighs)
I like your hood...
Very Bowie in Berlin, Low (1977) era...
DEATH
I’ll check it out...
FASHION
Wait, what? U killed that man and u’d never heard his Berlin trilogy?
DEATH
No, I’d never heard his Berlin trilogy, I was always more into the
theatrical personas; the glam rock theater; for the people! Not elitist,
like so much avant-garde, black box bric-a-brac..
FASHION
(gestures scratching with hand)
Chck out the claws on her, I’ll give u that. I misjudged
you, I figured you’d be all Underground LIT, cool-detached… But I agree.
However, the Berlin trilogy is an assault on theatre AND music for that
matter, as some might argue it put an end to both as we knew them...
DEATH
A point we can agree on is the manner by which Bowie is remembered
in both disciplines: Theatrical and Musical at once…
FASHION
And not only those two… I think that sums it up… Incredible, he thought
through reinvention and change.
(looks ruefully away)
DEATH
Yes, I’m truly sorry for your loss. He has died, yet he lives too.
FASHION
(rolls eyes)
Sure...
(rubs away tear but turns head and grabs make-up bag for concealer)

DEATH
Everyone has their way of working, so do I u know, we have our rules....
I’m really good at what I do... Anyways, you can’t say we don’t work
for the same people. To move on one must leave behind, surely you
know this of all others?
FASHION
I haven’t looked behind since Lady Die….
DEATH
Do you ever just stop and think about what it is you’re doing, what are you?
A bird, a plane, Wonder Woman? Who are you?
FASHION
I'm your baby sister
(grabs Death by cheek)
DEATH
Yes, I know, very funny, family of decay… but seriously...
FASHION
OK, seriously...
I don’t know...
I'm female because the two main categories were taken by men and things. Male and Neutral.
Female is neither, which I preferred. I’m like a recipe, I come together when things collide, ‘always crashing in the same car’ (Bowie, 1977). Perpetuum Mobile.
DEATH
OK, CIcero, speak to me in layman’s terms, get off your high horse!
FASHION
Si tu m’aide mon chevalier en armure brillante...
DEATH
U play your cards right…
(winks)
FASHION
OK darling, Well, you know how we started this conversation ?
DEATH
Yes, same as always, I complimented you on your shape, you are looking healthy… I can tell… Health must be in vogue or something cus not so long ago it was all heroin and marlboro lights.... Hmmm.. then you made some remark
about my style that I didn’t know if I should take it as a complement… Tbh, it felt like you were taking the piss...
FASHION
(with tongue-in-cheek)
Genau...
I mentioned your hood, you always wear a hood, and gave it a marker,
an image…
(takes out phone)
It's an association, or analogy as a form of recognition. While it allows me to make
sense of you, you in your turn have to reassess that which you thought, perhaps, was strictly yours.

You said I looked well, which is nice, it’s a formal comment that is nice and brusque.
I retorted by commenting on your hood, an aspect of your ‘look’ that obscures precisely that. The hood, or habit to which it belongs, is a strange example of fashion. Agamben wrote about it. To wear the habit, with its belt, hood, and neutral colour, as when donned by monks, ‘was an example of a way of life’ (Agamben, 2013, p.15). The habit is a visualization of the renunciation of vanity.
(looks confused for a moment)
a contradiction... but fashion loves those...
Anyheuw, by complimenting you on that, there remained the suggestion that the way it concealed your face was what was in fact nice about it.
DEATH
(looks away hurt and confused)
FASHION
Aww, my little smoochy-poo, come here you
(wraps arm around Death)
While you put out the lights, I turn on another, I want to see where things go...
Let’s stick to our story…
The hood is by no means neutral, as the monks intended them to be: the fashion of renunciation: perhaps the most glamorous look of all! I think this is what the Bowie album cover stands testament to.

Because the idea of neutrality, Maleness, Nudity, Truth, Normal, these are highly fashionable constructs…
(pauses for rhetorical effect)

This is a reference to the hoodies worn by young, black men living in the slums in America. Here, the hooded identity of the young black male is in terms of their fashion statement both an escape from their racial identification – a daily nuisance resulting in their being mistakenly or purposefully murdered by police – and a signification of what they represent in a society that doesn’t recognize them as equals; a disidentification, to borrow Munoz’ term. David Hammons hung the black hoody up upon the white walls of the white cube gallery. A fashion statement. Art can’t even represent racial bias, it’s too busy with what it can see: it’s white self.
DEATH
OK, yeah that’s strong, I admit. It’s simple and I like that. Black and white.

The Sun begins to shine. Death looks up and begins to wiggle his head while removing his hood to reveal the chalk-white complexion of his skull. He lets the sun shine right through his empty eye-sockets.

DEATH
(repeats to himself now)
That’s good... Black and white.

FASHION
Well, I guess you’re the only white 'person' who can make a
remark like that...
Death takes a deep Ouija Breath, as it becomes quite clear he is not listening. He takes out a spliff, ignites it and smokes while blowing huge smoke-rings. Fashion watches him in amusement, amazed at the fact that he doesn’t offer her anything.
Rae Jepsen, C. (2019) The Sound [video] Available from https://www.youtube.com/watch?v=6o0EN7CoLao [accessed 31 january 2020]

Manchev, B. (2015) The New Arachne: Towards a poetics of dynamic forms. Avalable from: <https://boyanmanchev.net/en/books-and-essays/philosophy/the-new-arachne.html> [Accessed on 1 April 2020]

Eno not being bothered 2 arrange hi-fi properly while convalescing from carcrash resulted in ambient music genre
Posted by BV at 2:35 AM No comments: